I bought the Samsung Galaxy Ace a little over a month ago. The switch to a smart-phone has been quite exciting and here are a few of things that I have had a significant impact on my experience with the Ace.

The Ace was supposed to replace my GPS Navigator, (Basic) Phone and IPod Touch, it managed to do that and more thanks to a few free apps from the Android Market.

The ACE:
One of the most striking features of the Ace is that its a very classy looking phone. The default back cover has a very nice feel and it was this combination that made me pick up the Ace over the Galaxy SL

At a screen size of 3.5″ it felt just the right size in my pockets and my palm, plus it provided enough screen real estate to read documents easily.

The hardware home button provides a little more easy access as compared to the touch based buttons of other phones of the same class. The Back and Menu buttons are touch based and are almost invisible unless activated, another feature that is very soothing to the eyes.

One of the biggest -ve points of the phone is the pathetic earphones that come with the phone. They are at best average and considering the lack of supported earphones for the Ace its a very irritating problem that I have to live thru for now.

GPS
I was pretty blown away by the features packed into Android thanks to the GPS. My iPod touch came without a GPS and the usefulness of one wasn’t evident until I started logging my morning runs and started using navigation.

The GPS tends to drain the batteries but considering that its mostly used inside a car it is better if you have a charging setup for your phone in the car.

The GPS is impressively sensitive and has been a great tool for my runs in the morning.

Phone:
I am not a huge fan of the touch interface for making and receiving calls but the big winner is the central contact system that is wonderfully useful.

I decided against using the default Swype keyboard available with the phone, initially and installed the Swift Keyboard.Â  After using the swift keyboard for a while I switched back to the Swype keyboard and felt much more at home with it.

Music Player:
The default music player wasn’t particularly good and I had to go for the paid Poweramp player.Â  The lack of a controller in the lock screen and all in all better control of playlists were the primary driving factors.Â  I tried Winamp and DoubleTwist but PowerAmp was clearly the best.

So thats my first thoughts about my new smartphone.Â  Its been a great help so far and looks like it will be very hard to move back to the ordinary phoneÂ  after this.

How to Disable Back Button Press in Android 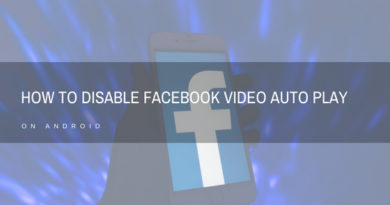 How to Disable Facebook Video Auto Play on Android